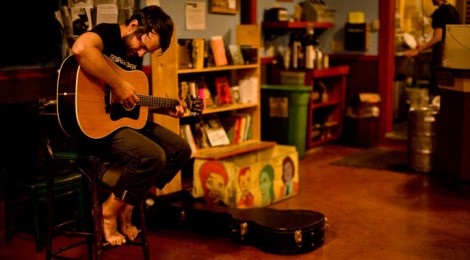 Well, we fell a bit behind on the recaps there. As soon as we started having to carry all our gear on foot the journey got a bit rougher… and things on the computer fell to the wayside a bit. BUT never fear! We are still committed to following up about each of our AMAZING tour dates! 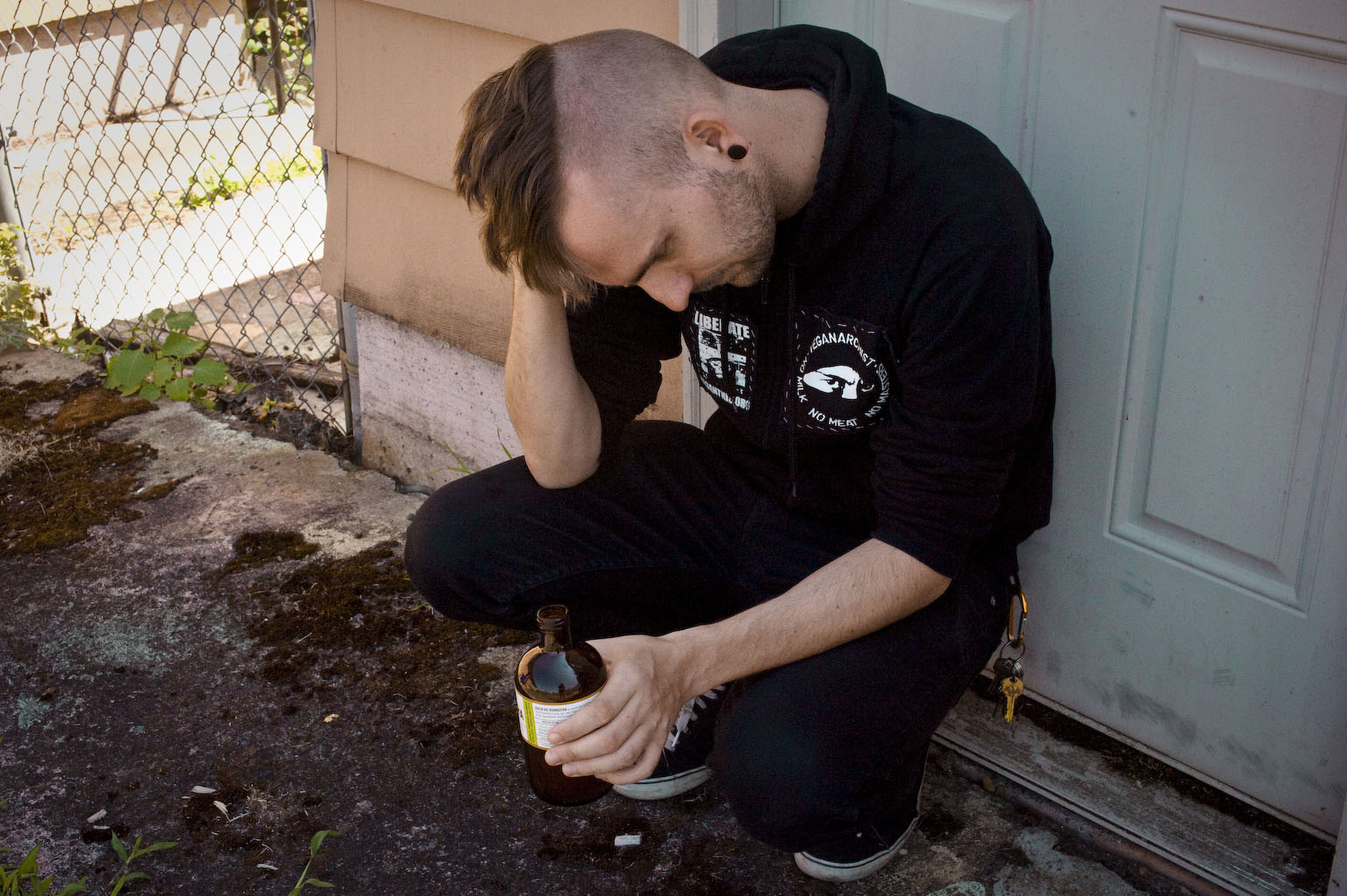 Where to begin with Portland?! If you have never been, Portland is like this super beautiful city nestled amidst all the natural beauty of northern Oregon, and with the most delicious vegan food you’ve ever had around every corner! We visited Food Fight Grocery at least 4 or 5 times during our visit (an all vegan grocery store that is FULL of some of the most awesome hard to find vegan goodies around, plus all of your old favourites too! It was like a road snack haven!) as well as the rest of the VEGAN MINI MALL and our favourite spot, The Red and Black Cafe! 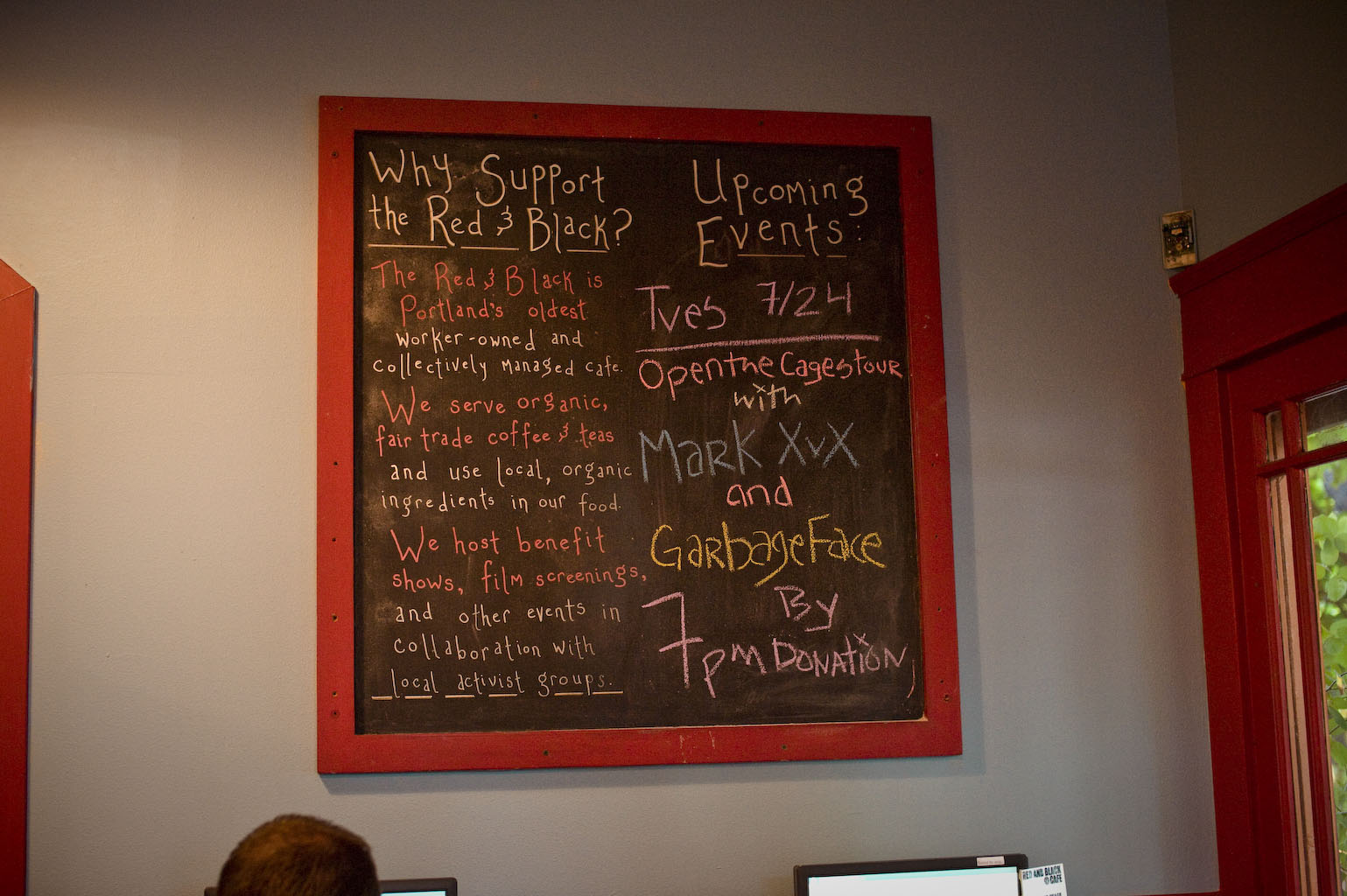 First up was the music event! We were all so happy to have arrived in Portland that we set up camp at the R&B for most of the afternoon. From our table we hosted a number of arm wrestling matches between tour mates, ate TONS of delicious vegan nachos, and set off on two separate missions to the Because We Must warehouse for shirts and other cool vegan swag! I think some folks even made the treck to Voodoo Donuts for a goodie box of vegan pastries! 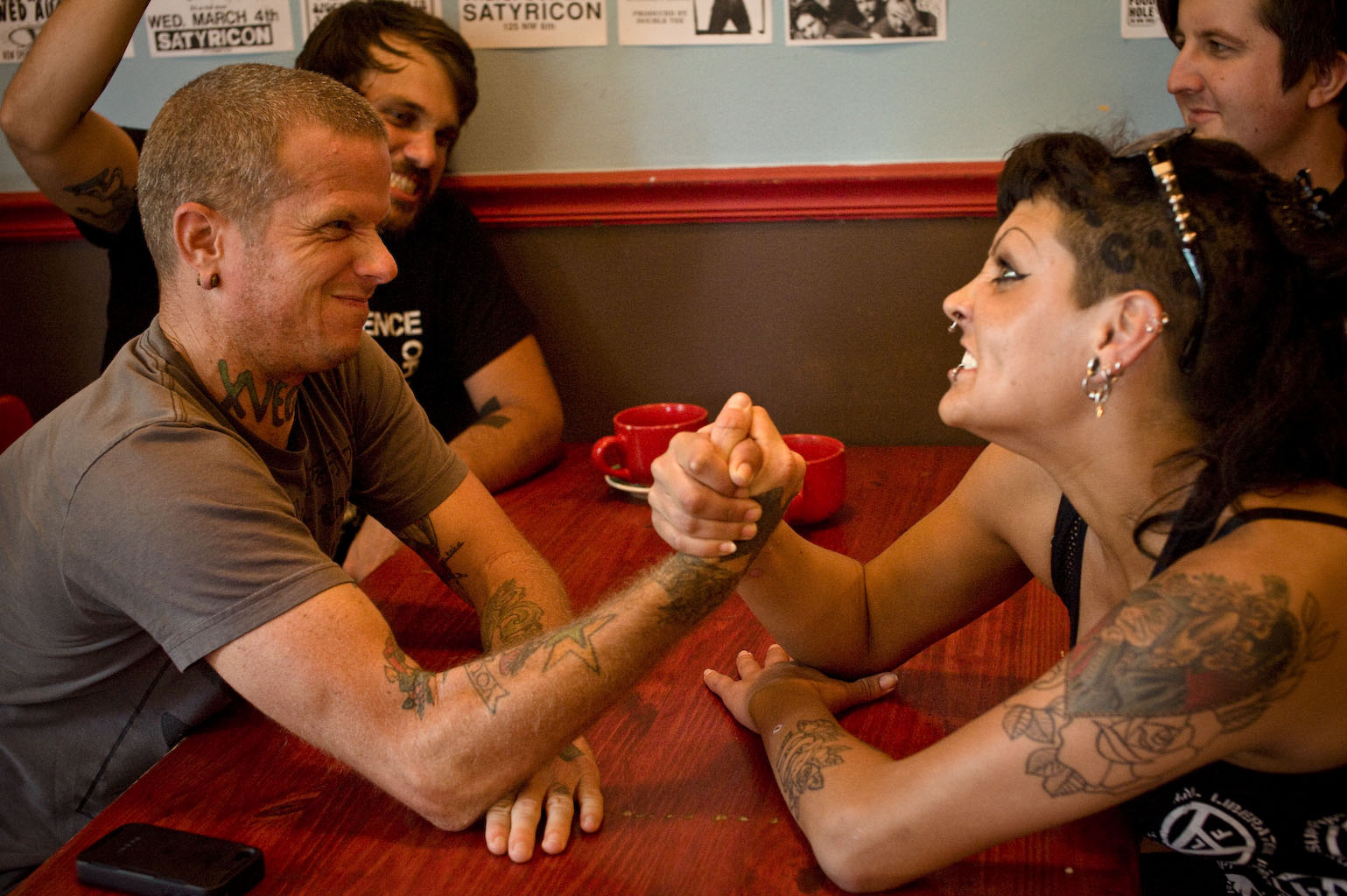 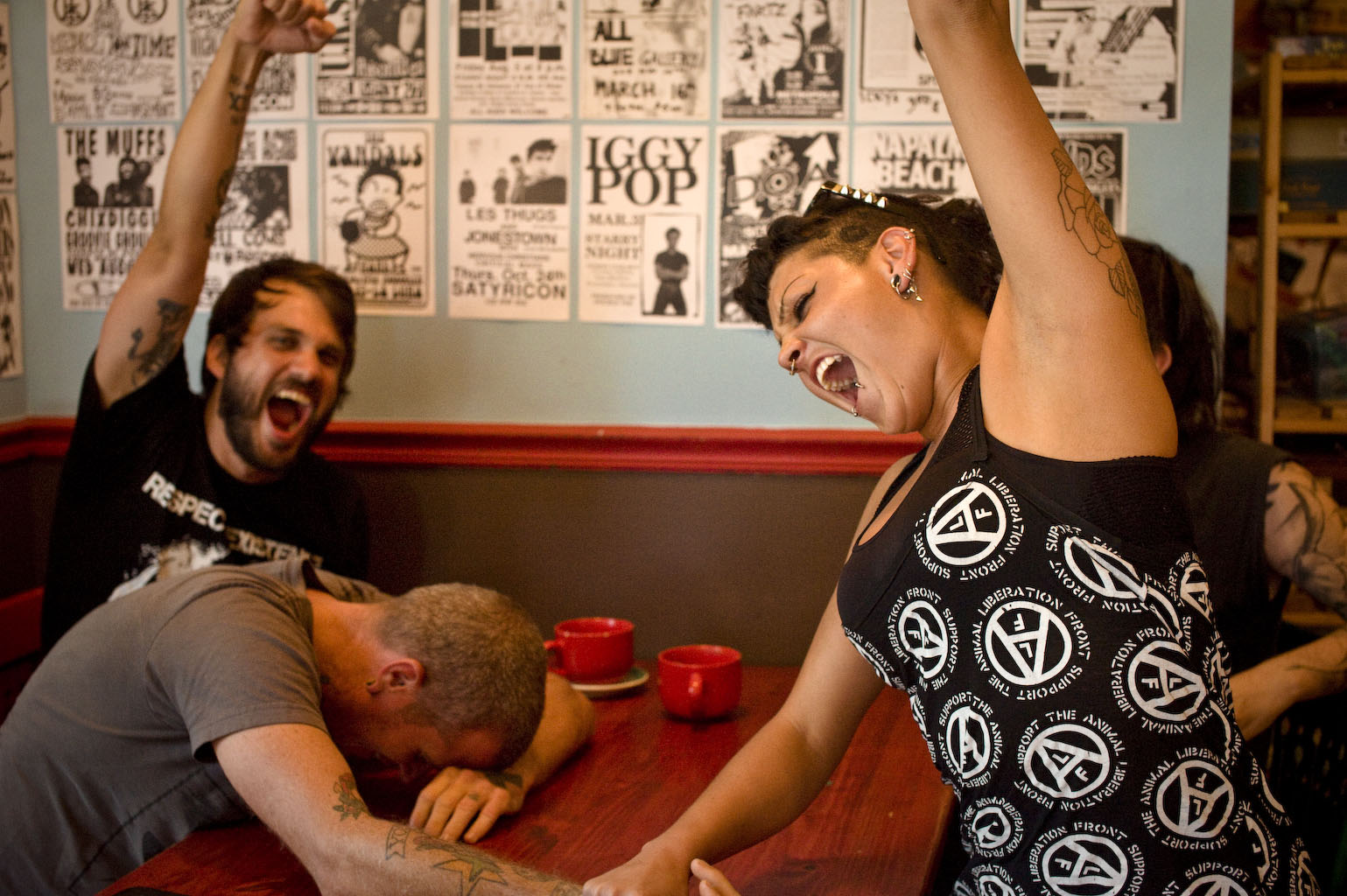 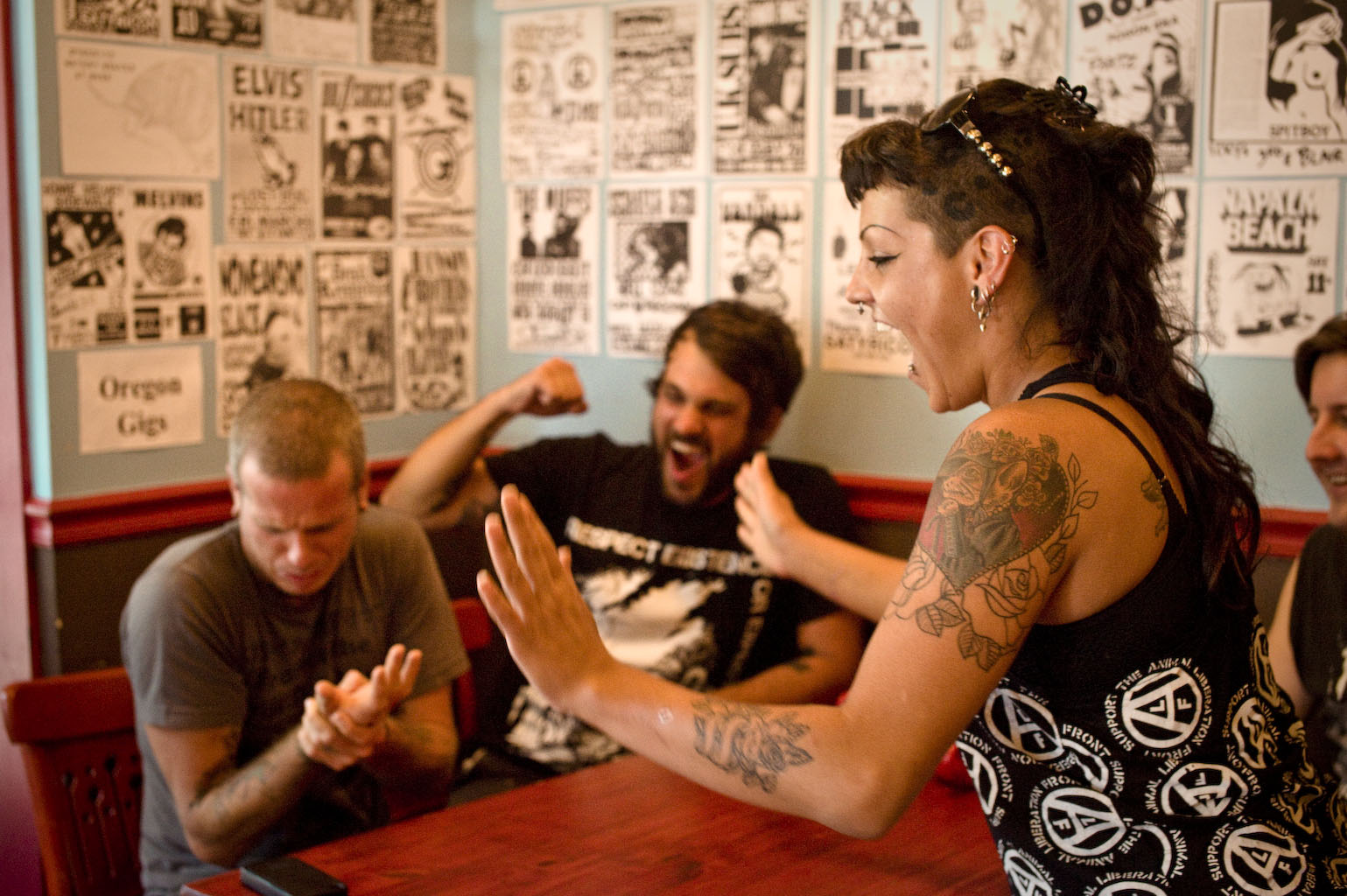 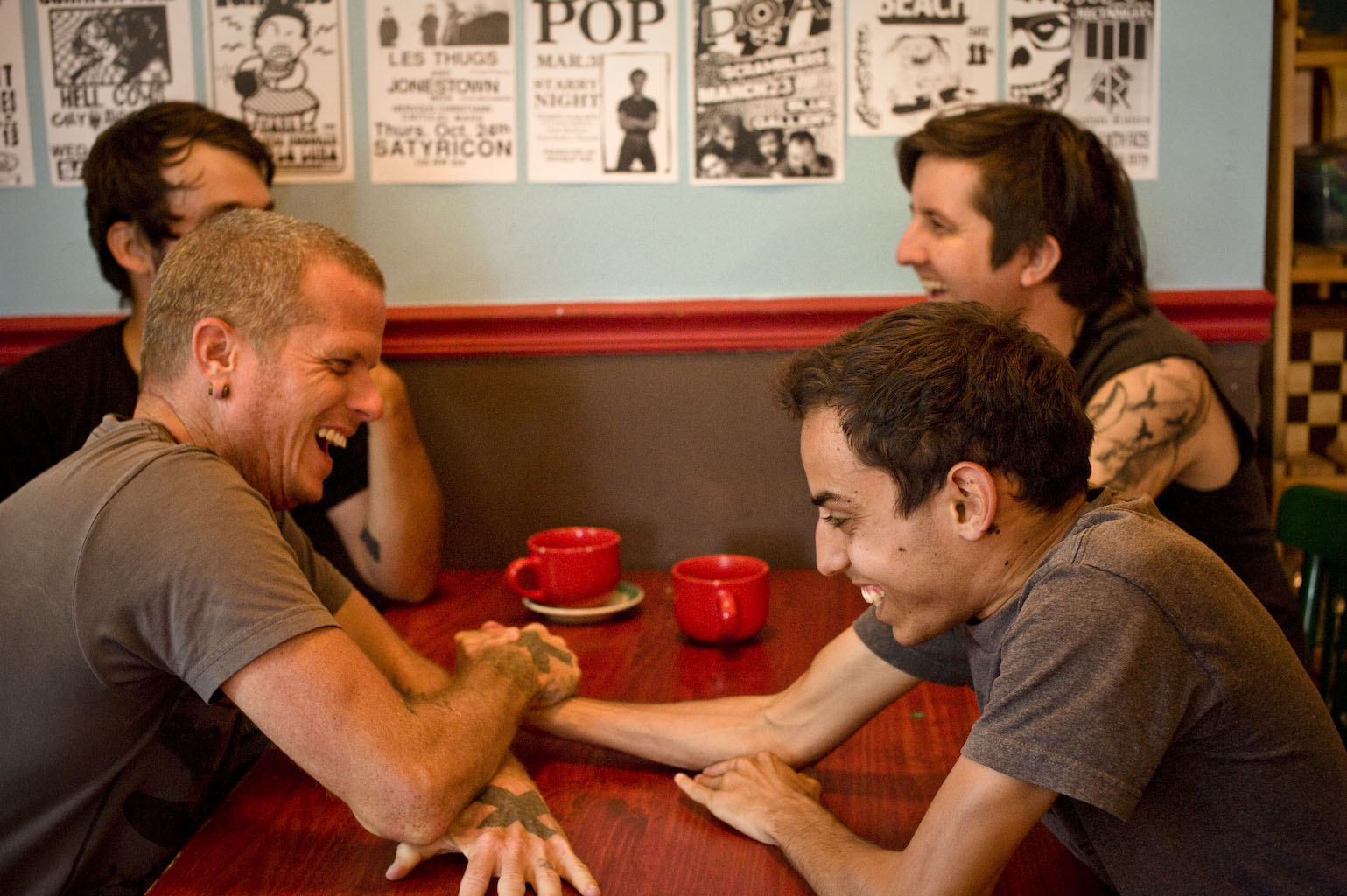 Around 7PM things got started, first up was Garbageface! Many of the crust punks that had come for the other two acts were not quite sure what to make of the whole thing, but by the end most were won over! (Raining Blood has that effect on people.) Mike was on his home turf so a lot of people had turned up to see him play. As a regular performer at the R&B a lot of people knew the sing along parts and were requesting songs! As usual the big finish went over really well with the crowd. Closing out the night was Sina Youssefzadeh who is another Portland local musician! Sina’s music was AWESOME!! He plays with so much passion and his songs come from his heart (and you can tell!) Between songs while repairing some broken strings, the crowd shared all the anarchist, vegan, punk and working class jokes that they knew. It was so much fun. We were really feeling the drag of the tour by that point, but Portland spruced us right up! 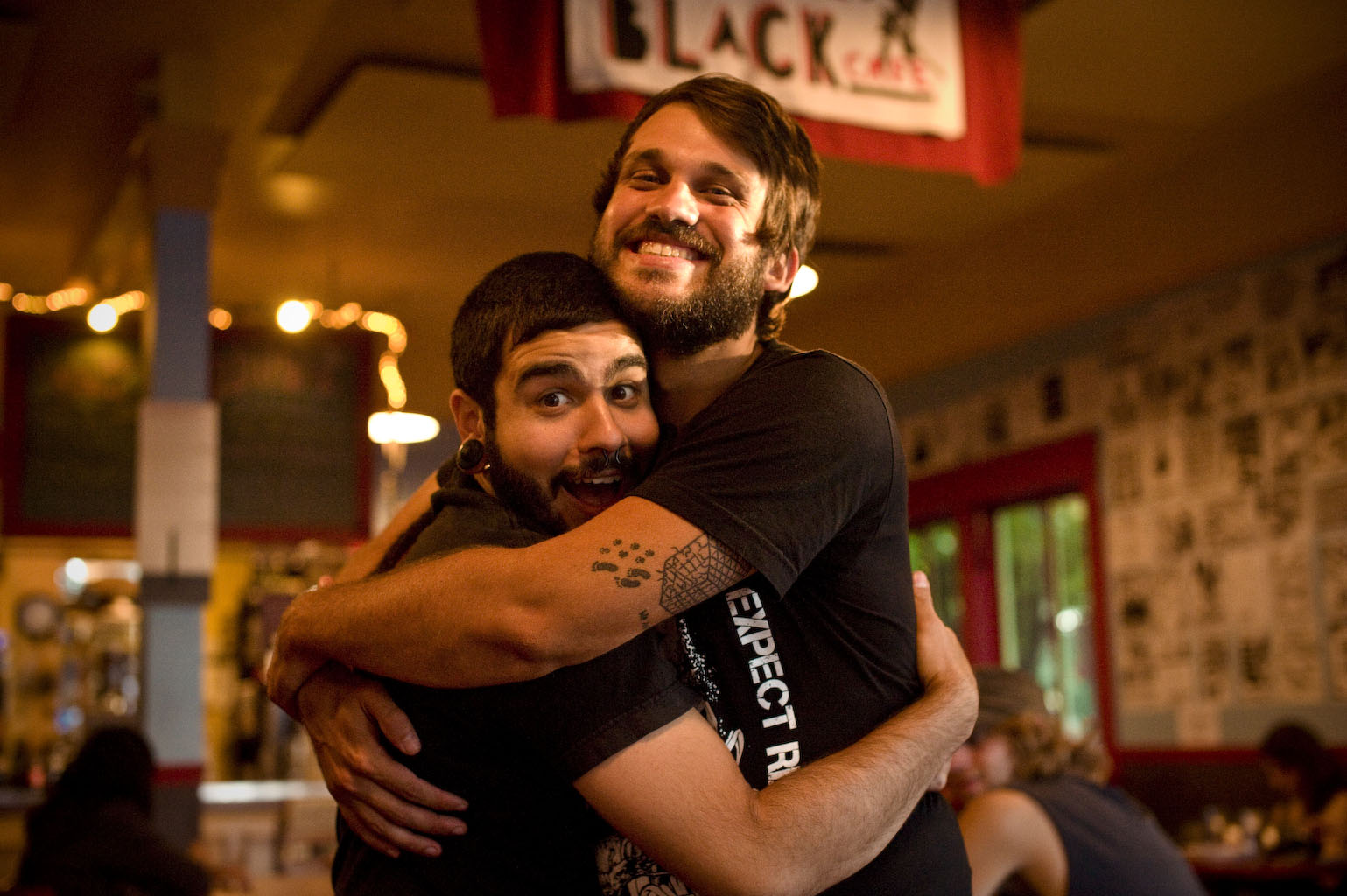 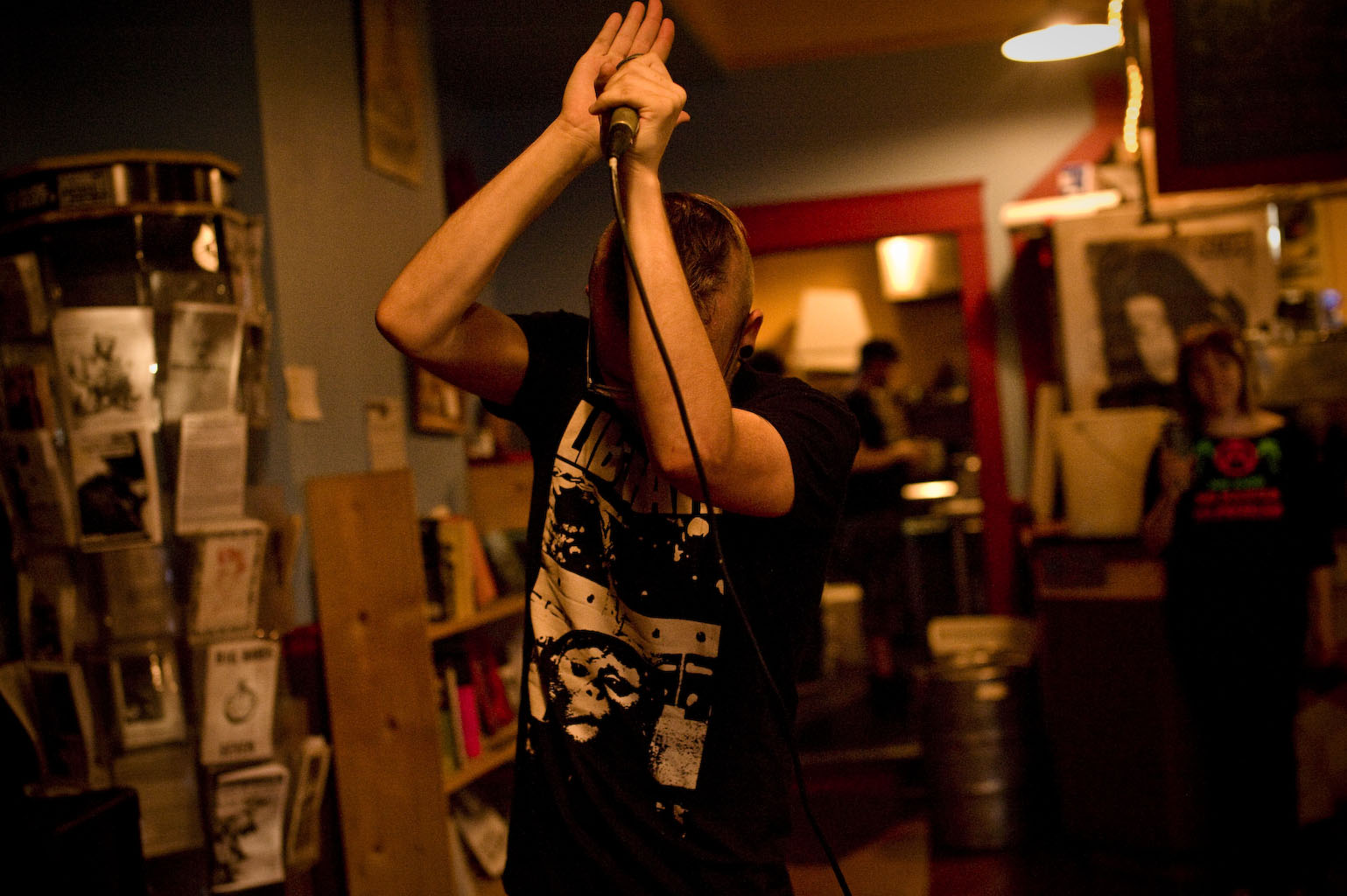 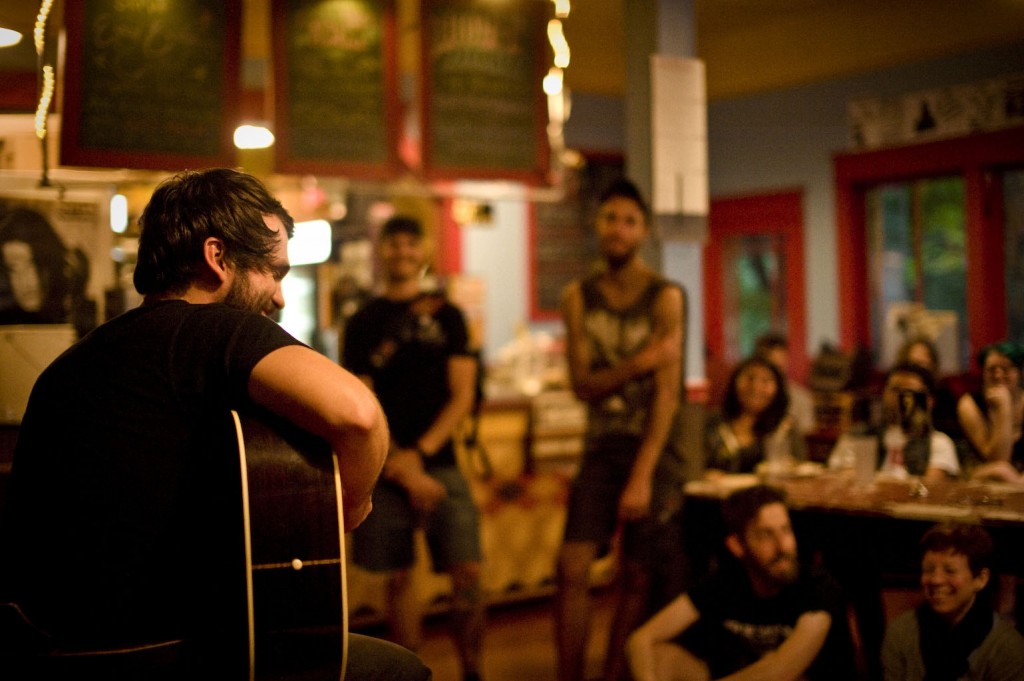 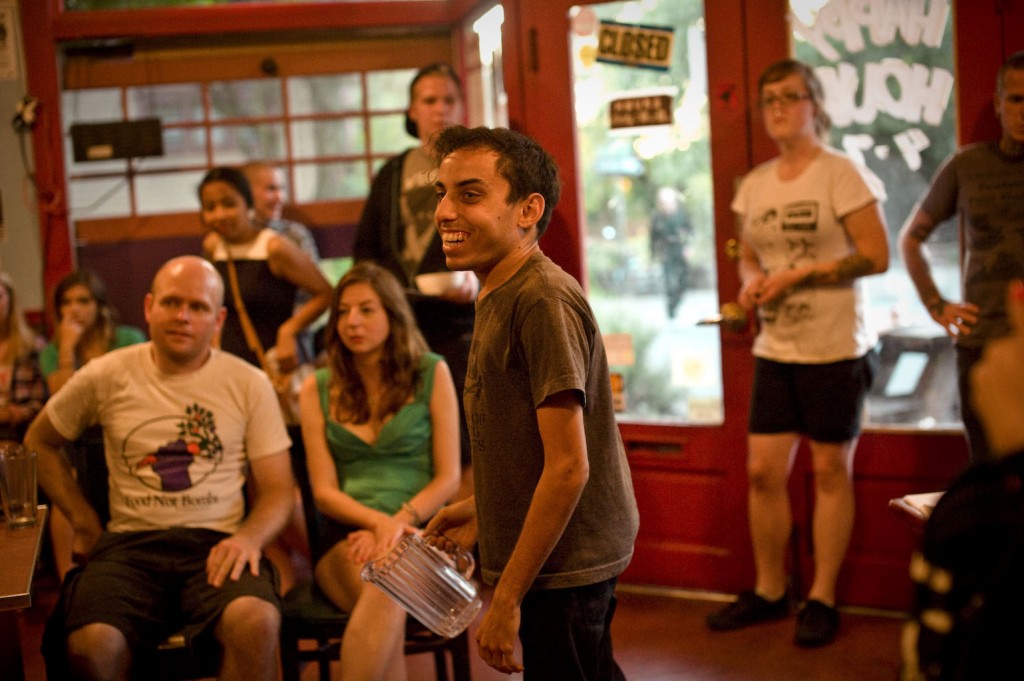 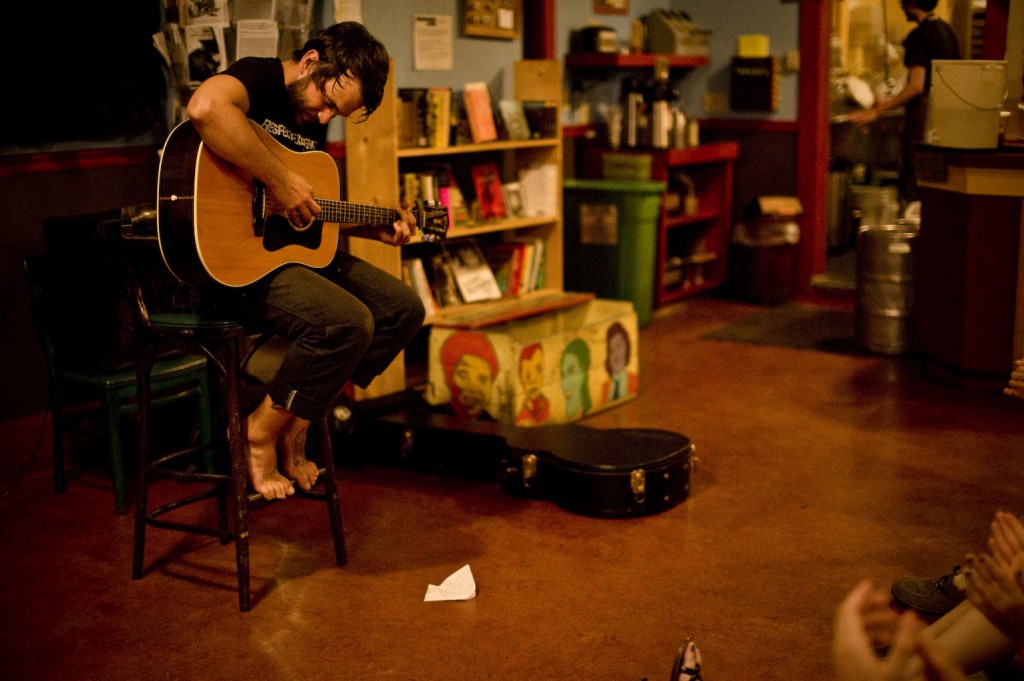 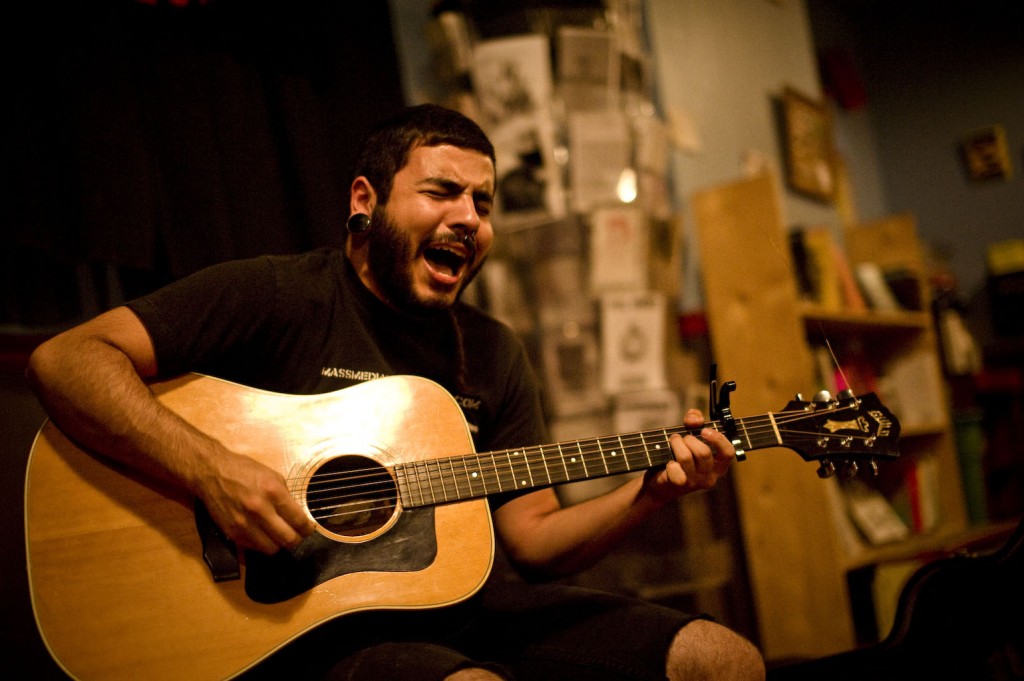 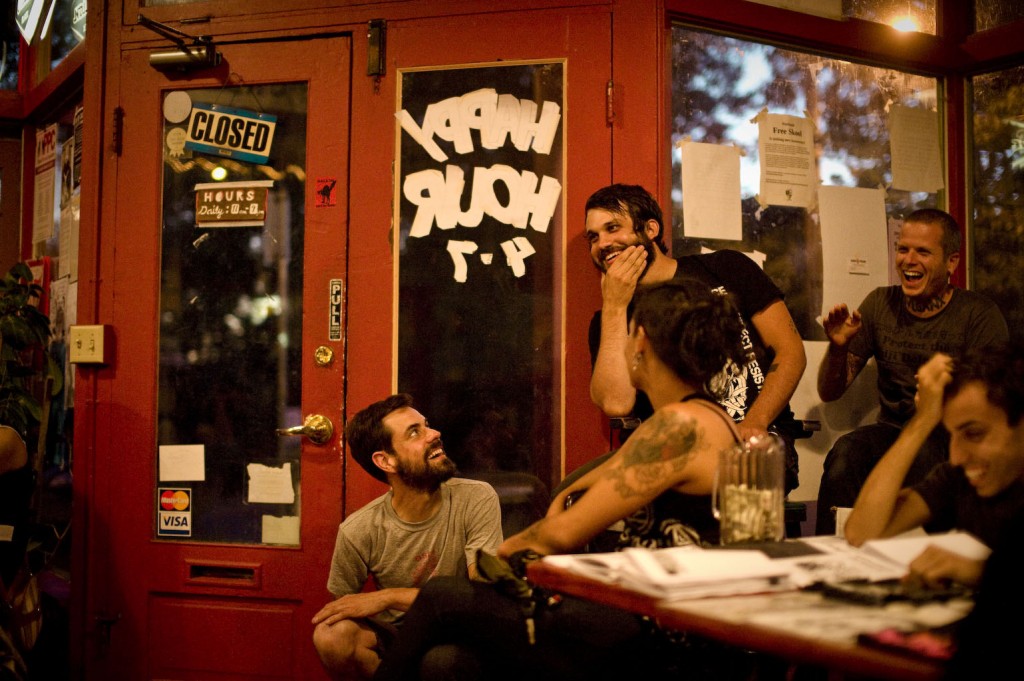 The next day we had our demo at the ONPRC (the Oregon National Primate Research Center), an infamous facility that is oddly buffered by an entire suburb of family homes. The entire facility is surrounded by families and regular people who have no idea the cruelty that happens in their literal backyards. We were there regardless, disrupting their quiet streets to expose the horrible atrocities that occur so near to them. We were met with an outrageous police response considering what we were there to do. They had brought a full mobile police station to the site, as well as undercovers and two separate jurisdictions of officers. With cops come media though; a few television stations turned up to talk to us about the tour and the protest. We also got a lot of information out to the people who lived in the area and many expressed their support. After occupying 6 corners at once leading into and out of the facility, as well as operating all 3 microphones, and having about 20-30 people overall show up (not bad considering we needed to carpool out there!) we called the demo successful and returned back to the city to prepare for the screening. 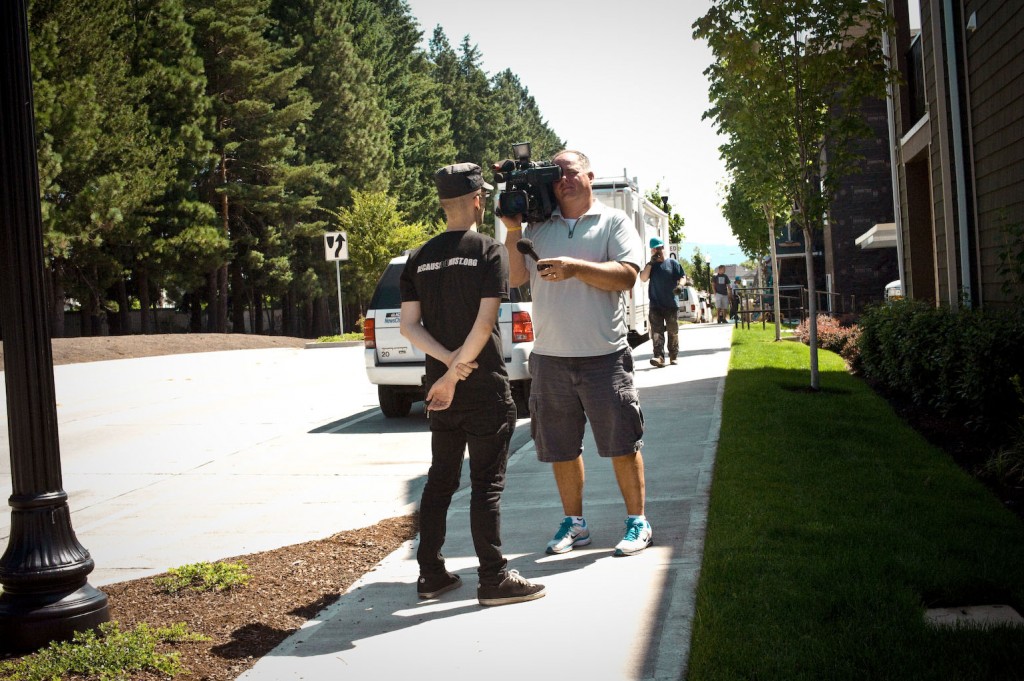 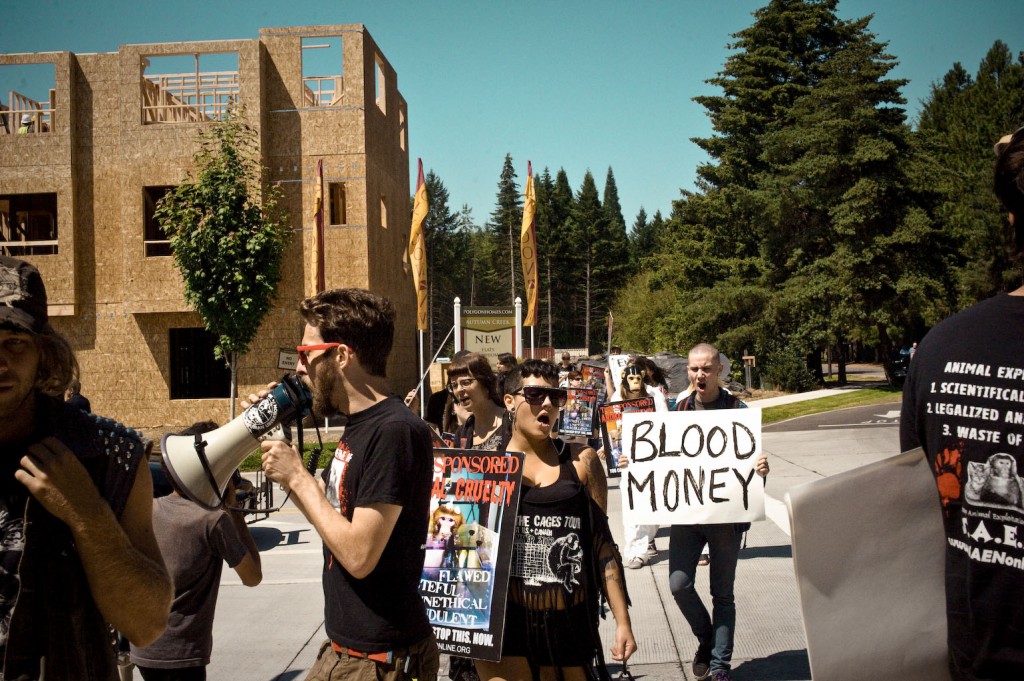 We had a few days off in Portland as well as the regular music, demo, and screening events–but we weren’t on vacation–Portland was the big one for the film. The good folks at Food Fight had sprung and rented us the Hollywood Theatre to show Maximum Tolerated Dose for the first time EVER on a big screen, in a real movie theatre, WITH VEGAN POPCORN! To say that we were excited would be an understatement. I think we all had a tiny freak out when we saw the name on the sign from across the street. 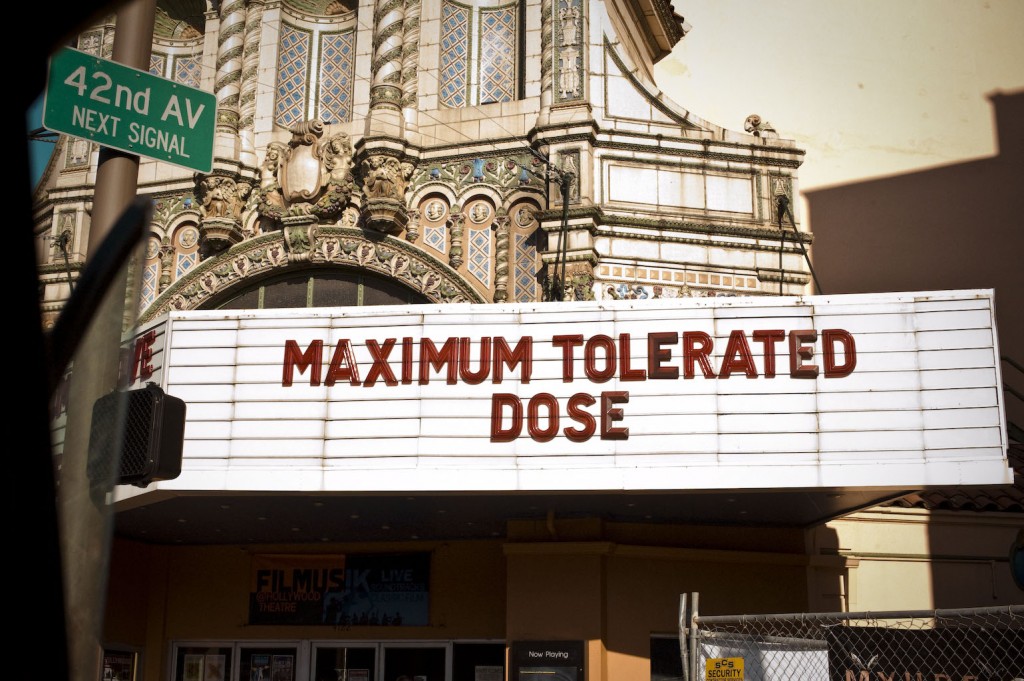 The theatre was almost full by the time the film began. Food Fight as well as a number of other businesses in Portland (Herbivore, Scapegoat Tattoo, and more) had been supportive of the tour and promoting the screening for months! We were so moved by the turnout! After the screening we had a round of Q and A which actually spilled out into the lobby where it was all hands on deck answering questions, meeting folks and selling t-shirts (a few of which are still available if you missed out!)

After that we were all pretty bushed, so we went back to the home of our gracious host (who was also on tour with us for some dates) watched Dumb and Dumber, and called it a night. 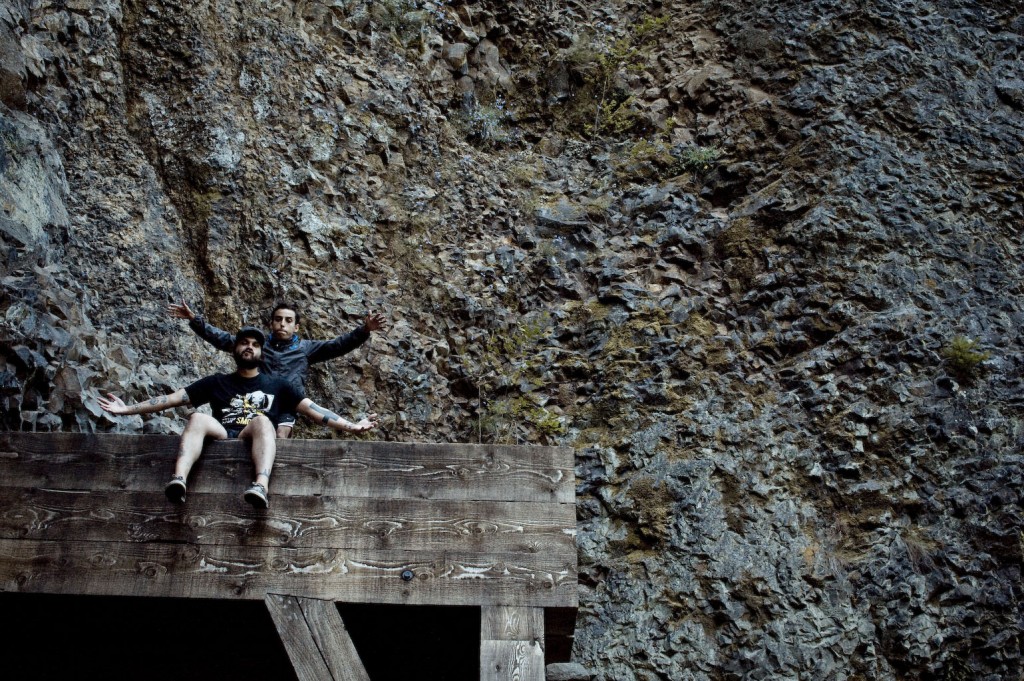 After a day off at Multnomah Falls and Columbia gorge to swim, we were sufficiently well rested and ready to roll onward to our last US stop of the tour, Seattle. (and Wayward. Did I mention we were going to eat at Wayward? We were stoked for Wayward…) 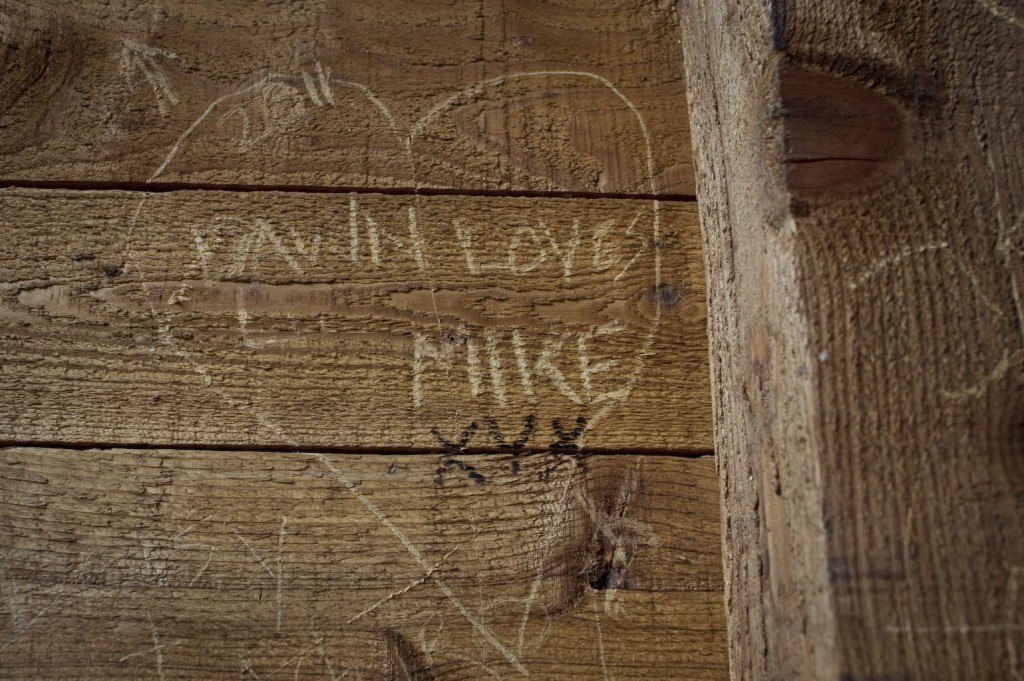 Until next time!
The OTC Team