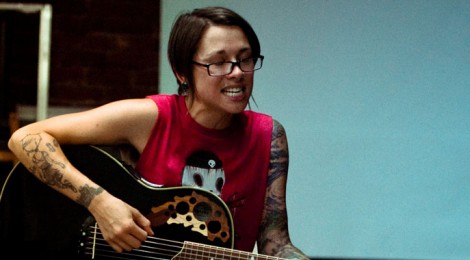 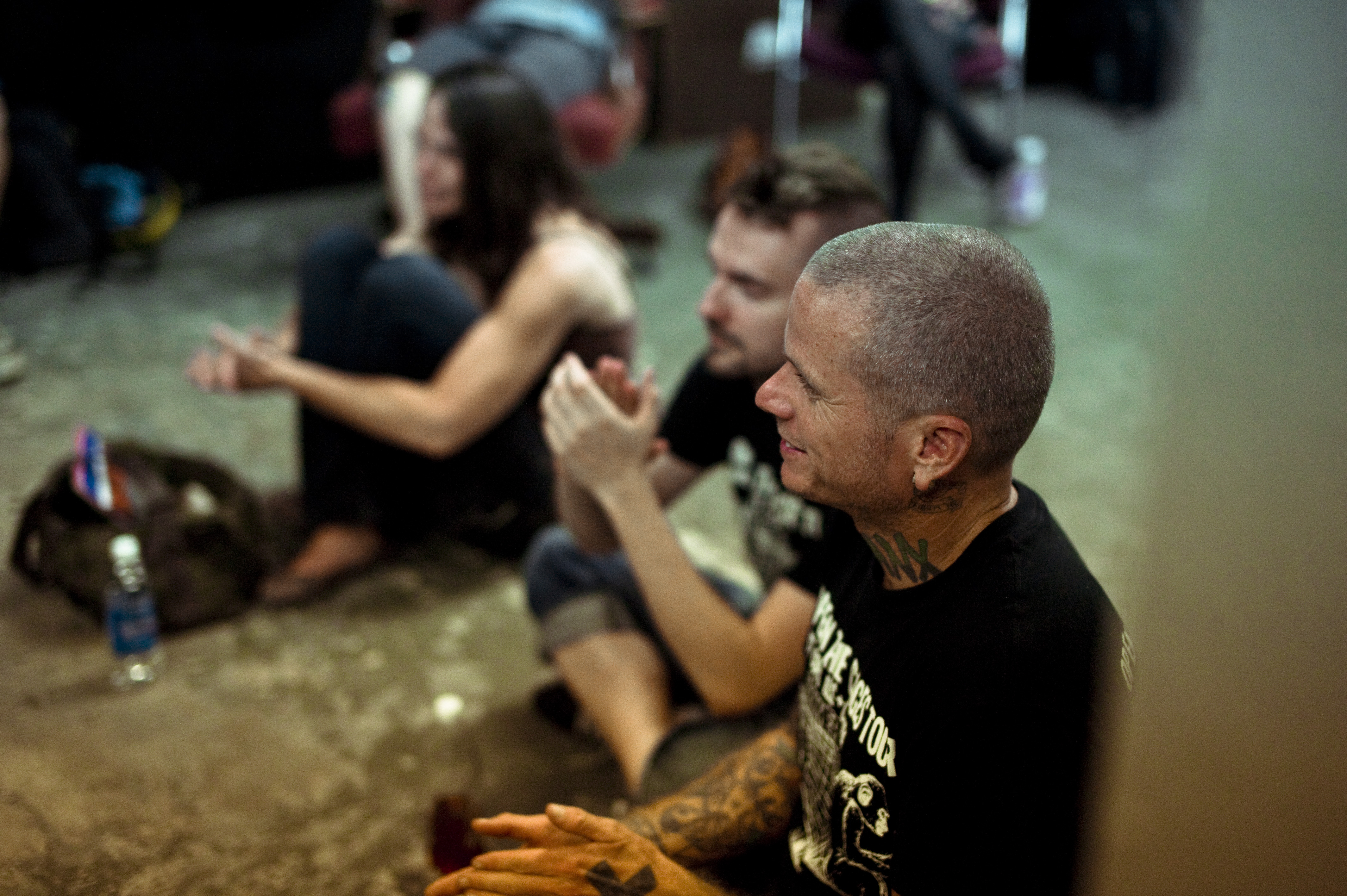 Moving right along! On the 13th of July we rolled into Riverside CA with the whole caravan almost without voices from all the chanting from earlier at UCSD. We got through the traffic and the heat after filling up on a delicious vegan meal, ready to show the film and set down our tired selves in the amazing space that is the Blood Orange InfoShop! The space is a large open-concept room with sofas, tables, free internet, a library, a clothing swap/free store, zine collection that would make most DIY folks salivate, and most importantly the welcoming and smiling faces of friends (new and old) who were very happy to have us! 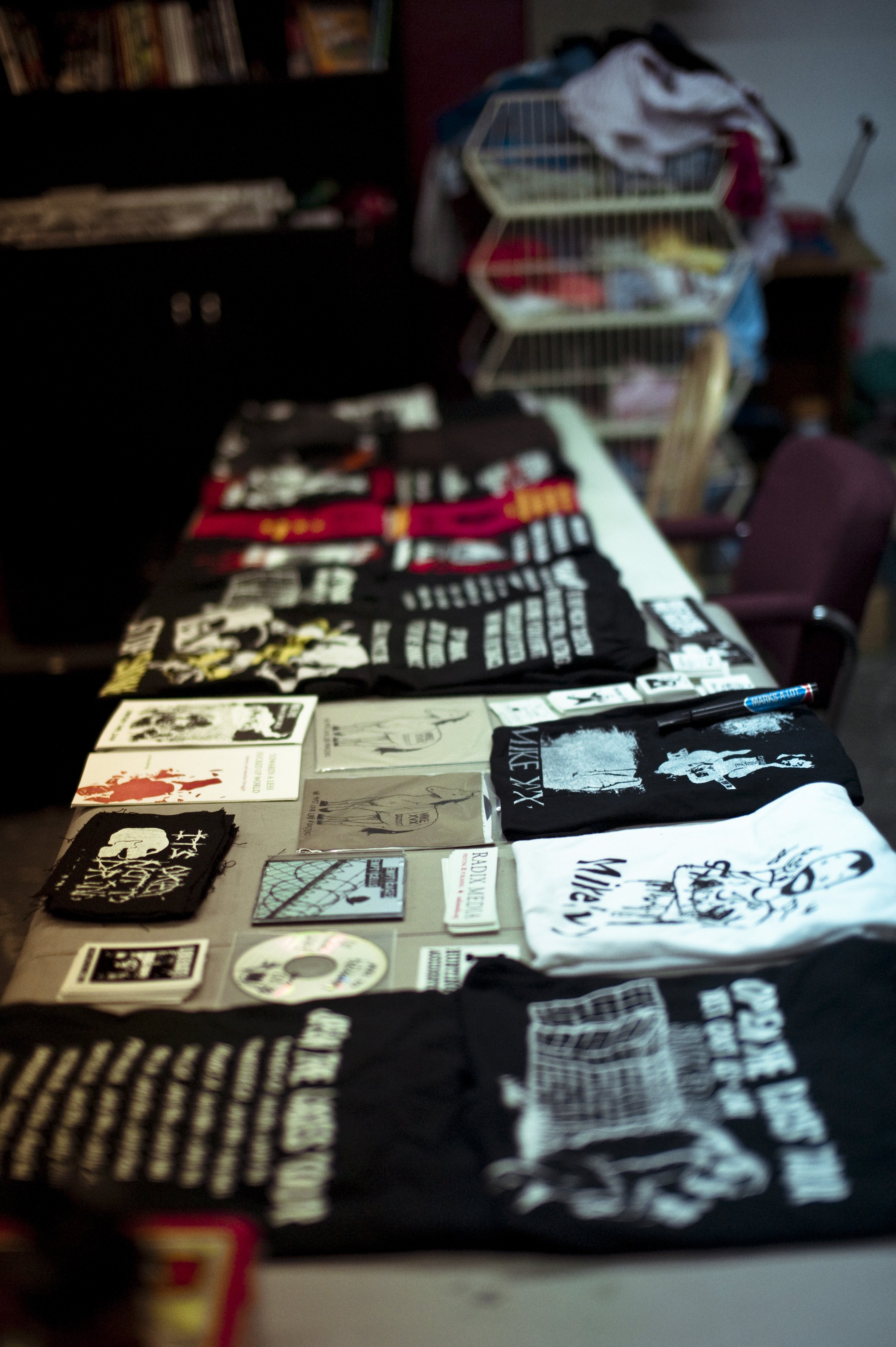 The event was a screening and music event–no workshop due to time constraints, but everyone was so social and friendly we all ended up just talking about demos and strategy anyways. The space was made ready for music to start around 6PM, with people seated around on the floor, in chairs, in doorways and on tables. It felt more like playing in a friends home than in a venue–we felt very fortunate to have been welcomed so warmly and so sincerely by the folks that were there. 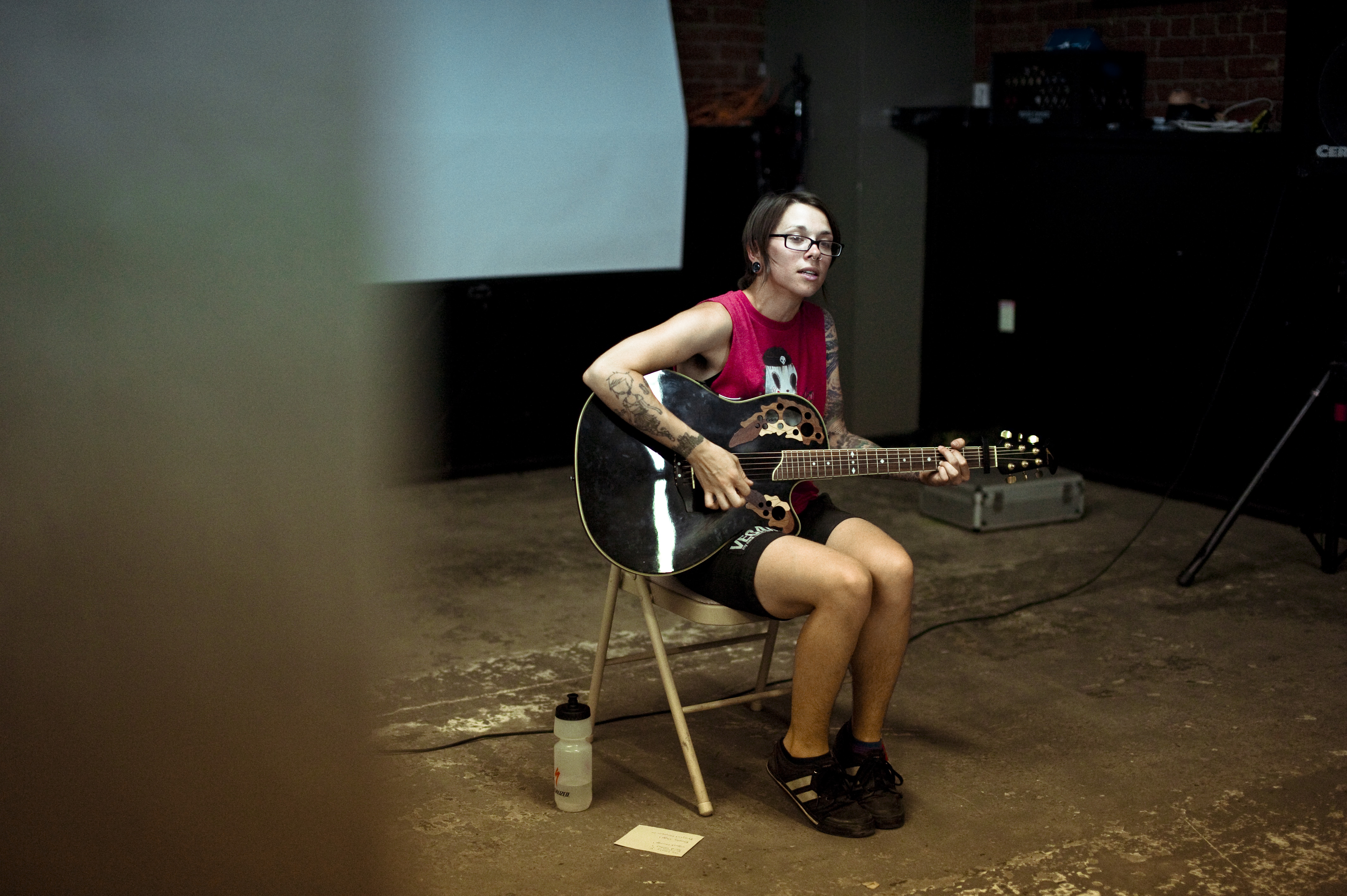 The first musician to play was Breezy Marie. She has this incredible voice that seems to pour out of her small frame as though she couldn’t hold it in if she wanted to. She plays by herself, with a guitar and no amplification, but there was no one in the space who had trouble hearing this powerhouse! Even more to her credit, the songs were about personal stories that many of us could relate to, growth, hope, strength and liberation. Breezy was the perfect start to the evening, we were so happy to have had her be part of the date! She also was one of the very first backers of Maximum Tolerated Dose, back before most people even knew it was being made, so the film production team was especially happy to have been able to make her hometown the second ever public screening. We love you Breezy!! 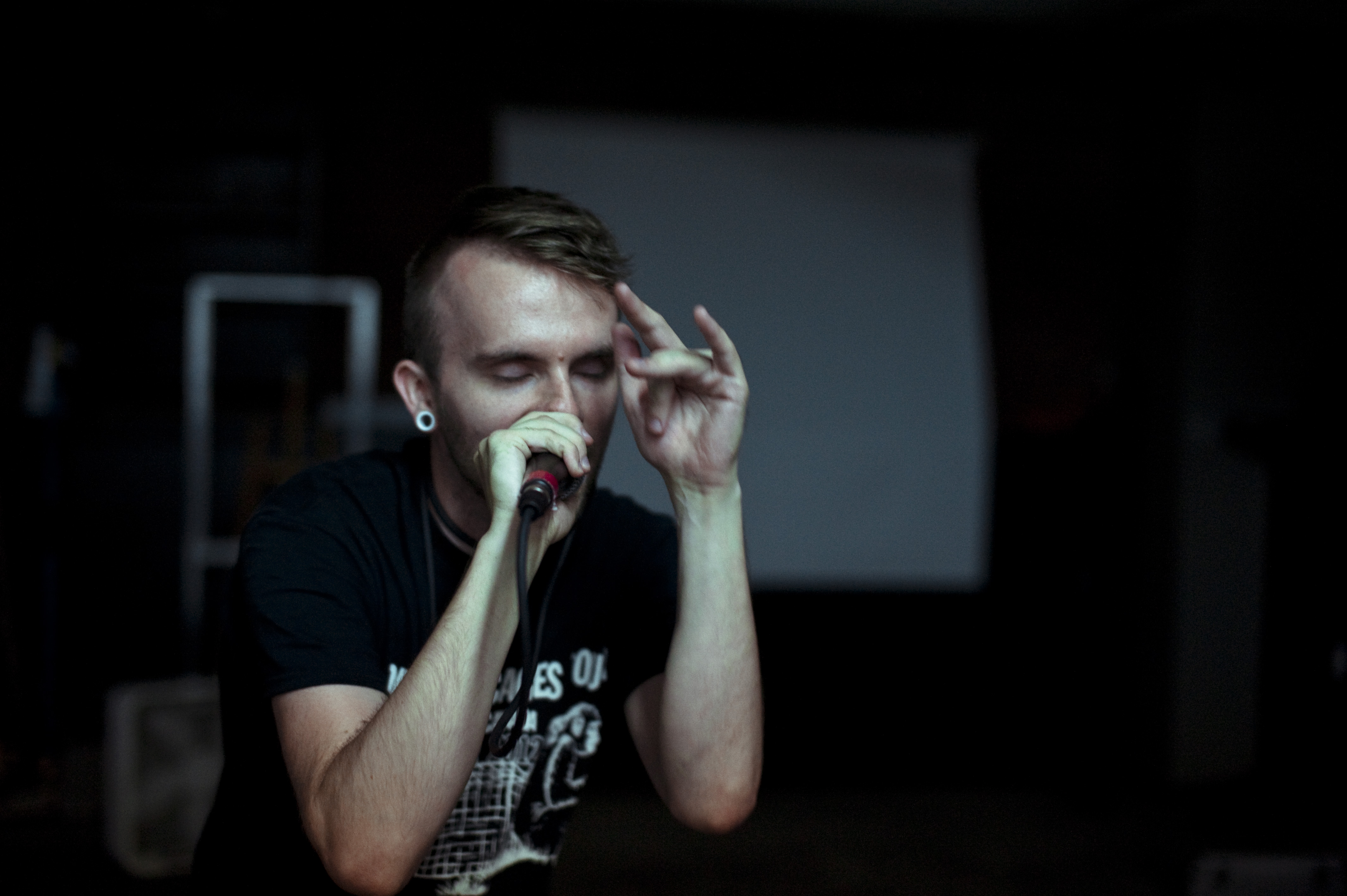 Following the set by breezy everyone had to stand up and get ready for Garbageface; the solo music project of the film’s director Karol Orzechowski. What was especially fun about this date of the tour was that despite having already been on the road for days and living closer than most people out to the last few days, no one but the film’s producer had ever seen him play, so this was another big debut for the tour. For those who don’t know, Garbageface is a one man project consisting of a sampler from the 90′s, a loop pedal, a microphone, and a the voice of Karol. He first cleared the air as we all had a lot of pent up energy from the demo earlier that day (by screaming into the mic over feedback on the PA. We all felt much better. Despite a scattered crowd and a relatively empty space the room was suddenly filled with beats, loops, drum machine sounds, samples, and Garbageface literally circling the room, cord knotted about his neck. He closed his set with a cover of Raining Blood (not an easy feat all by yourself) and everyone felt sufficiently energized. 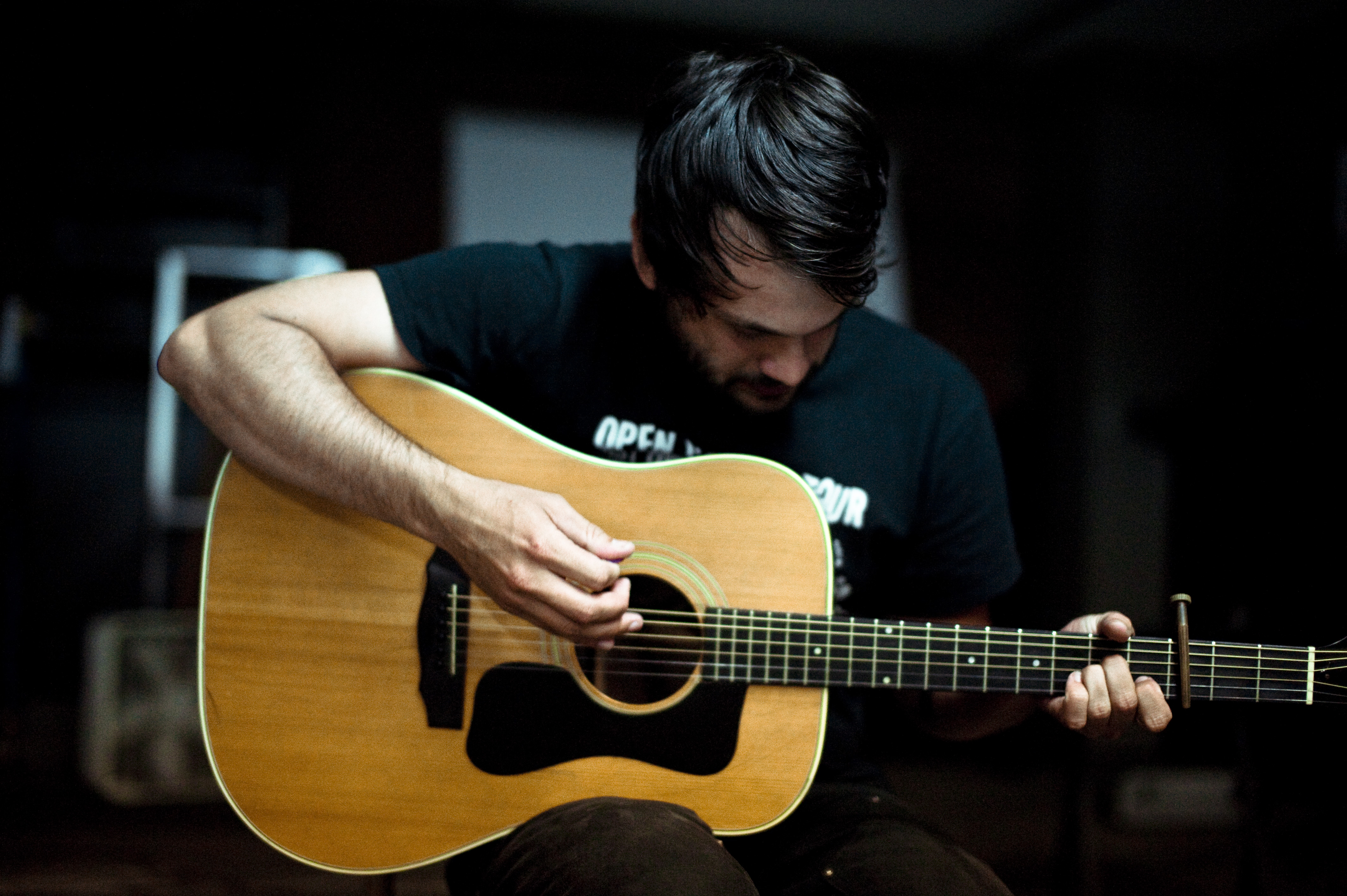 Our final music act for the night was Mike XvX. Anyone we seem to run into in Southern California (and much much further) seems to know Mike. His music is a single-person folk-punk project he has been crafting and building for half a decade. Mike has toured Europe, Australia, the USA and Canada extensively, and his music and lyrics often show up on social media sites because of the strong political messages in his lyrics and his own personal convictions. The show at the Blood Orange did a good job of justifying his reputation. He began the evening with a number of songs that most of the audience seemed to know, with many people singing along to the choruses and the verses at times. About halfway through the set, due to the intimate nature of the event Mike felt comfortable playing a song he rarely does, which speaks directly to his surviving the Tsunami in Japan while on an action with the Sea Shepherd Conservation Society. He closed the night with two rowdy crowd pleasers that have sing-along/yell-along parts that everyone always loves, and since one of them is about HLS, it was an excellent primer for the film. 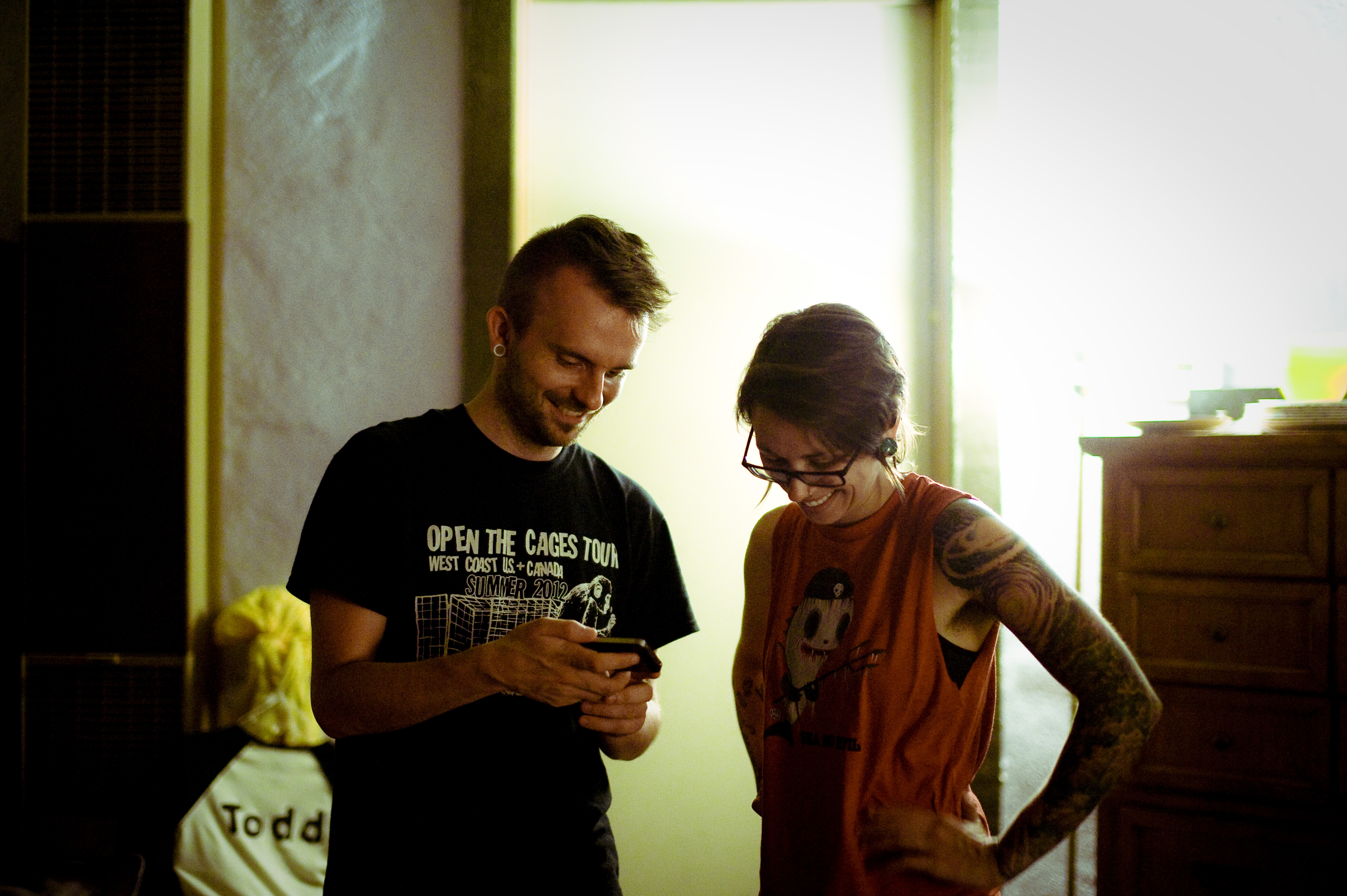 The film got started once the chairs were set up. There were about 15-20 people still around after the music events so they were the second audience to see the film. After the film during the Q and A we heard a lot about individuals that were themselves the caregivers for rescued animals, individuals who again wanted to know what they could do to respond to what they had just seen. Unfortunately due to the fact it was a friday night, the demo planned for the next day would be more difficult to get people to attend, and it would be harder to have an impact with it. 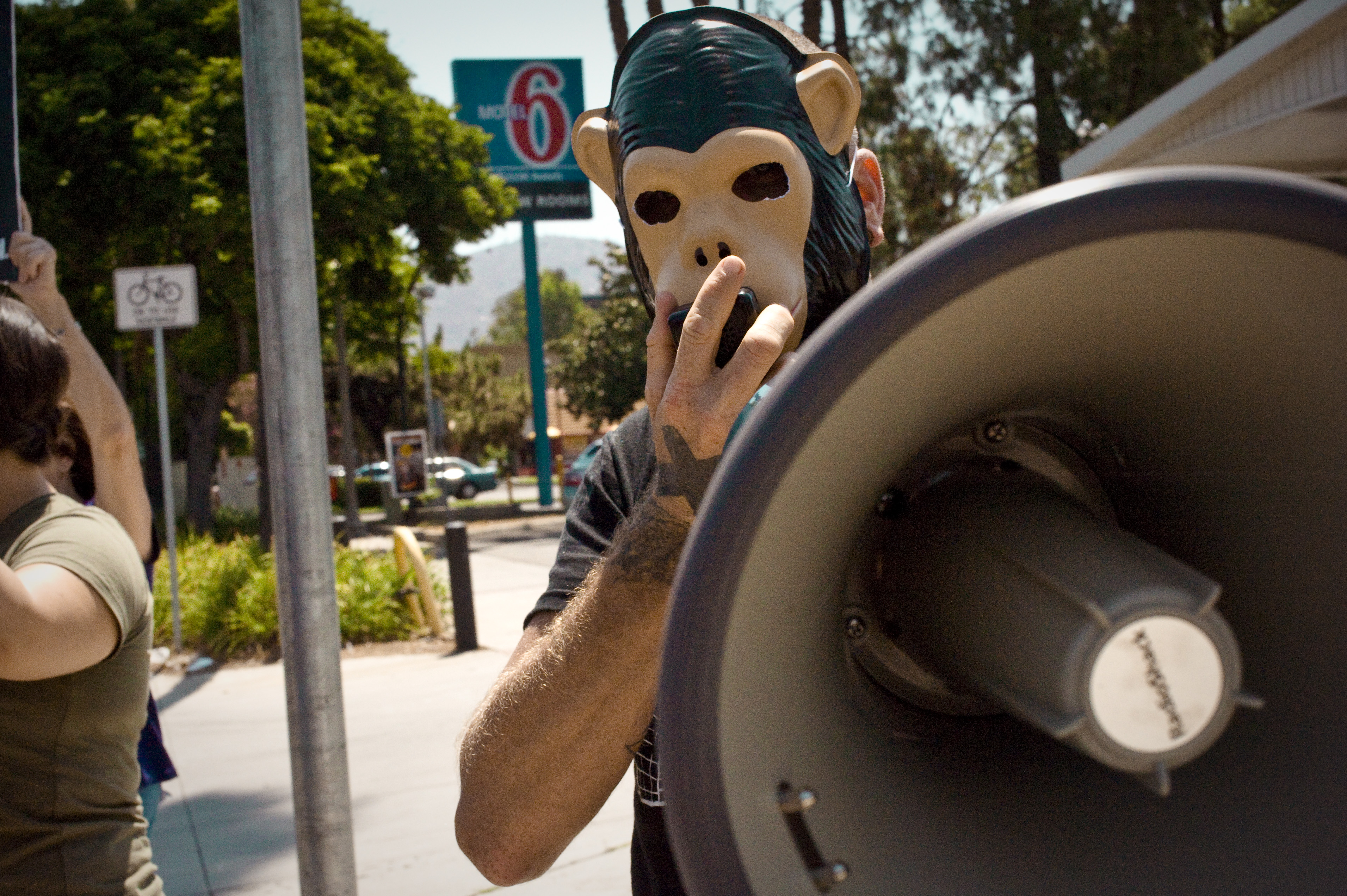 The next day we met with a number of people who had seen the film, three bullhorns, six primate masks and dozens of signs from SAEN and we began to march to the university campus. As a group we walked from the busy intersection outside of the campus into the grounds. We were immediately followed by police (of course) but with 100 degree weather, they parked in the shade and didn’t get out of their car to engage us. We went to the front steps of all of the life sciences buildings and the laboratory buildings. Because it was the weekend the student population was not at it’s peak, BUT the staff that care for animals, the graduate students, principal researchers and others who need to tend to the animals daily were still present, and we made sure that they heard us. 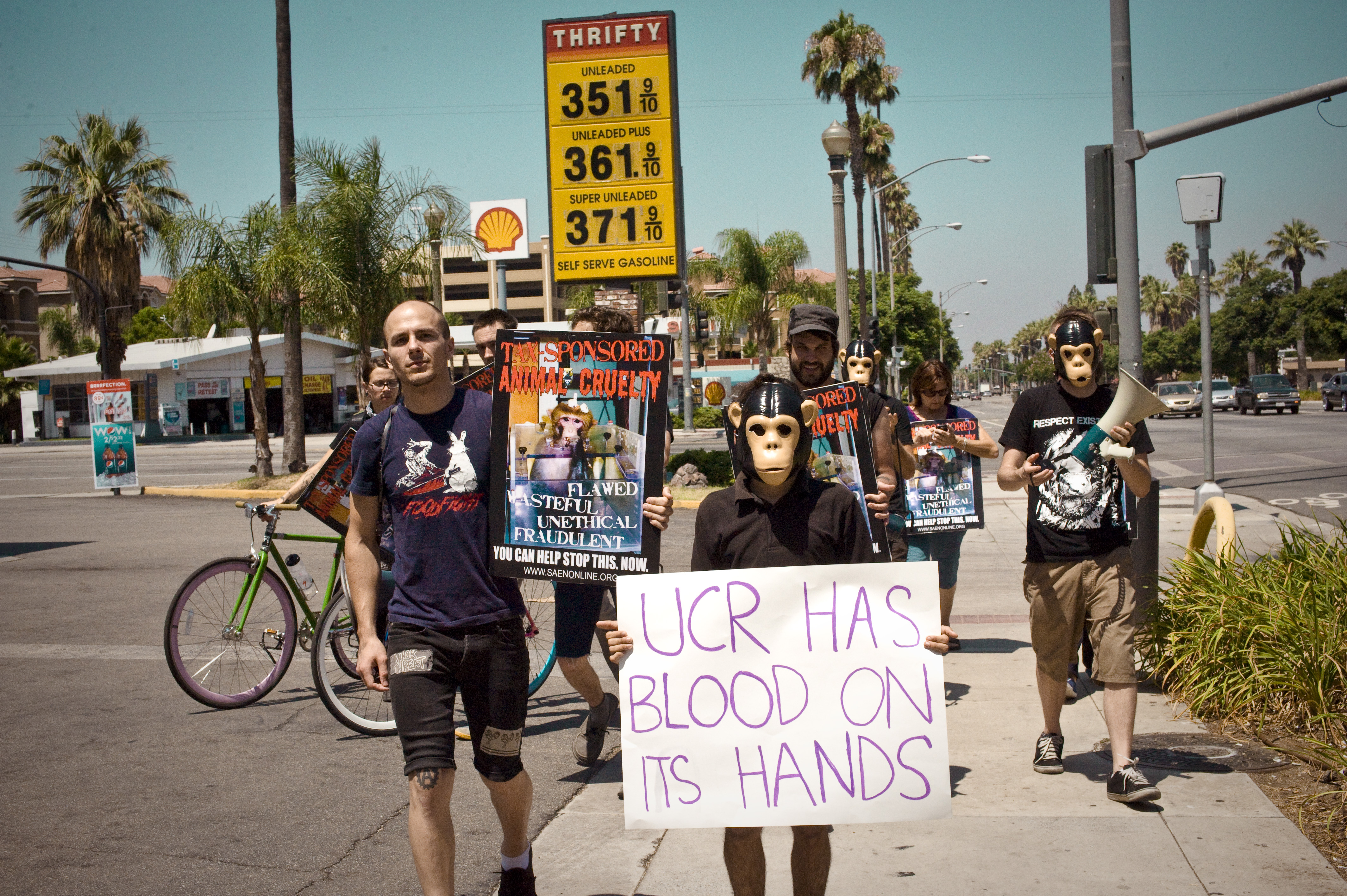 Activists who were with is and had attended the screening had said they intended to continue the protest, however we needed to get on the road to LA. After getting some kisses from some puppies through a fence, we were back in the van and en route to the double-feature screening that we had that night. We arrived with even less voice and even more tired, but more on that tomorrow when we are finished with our music event tonight, which at last count had over 100+ RSVP’d as attending! Stay tuned! It’s going to be EPIC!! 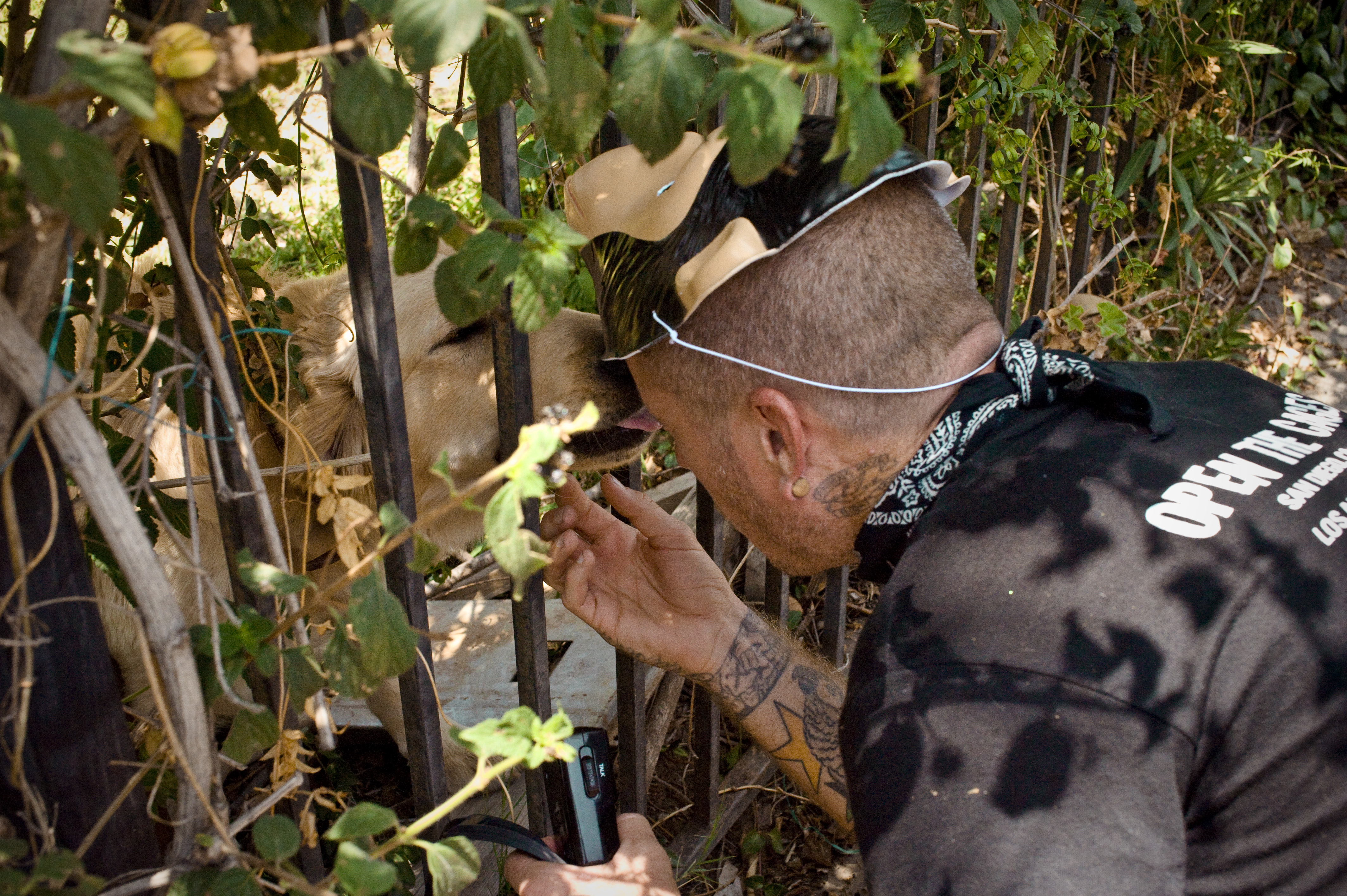 Tag any posts you make about the tour with #OTCTour so we can follow you too! 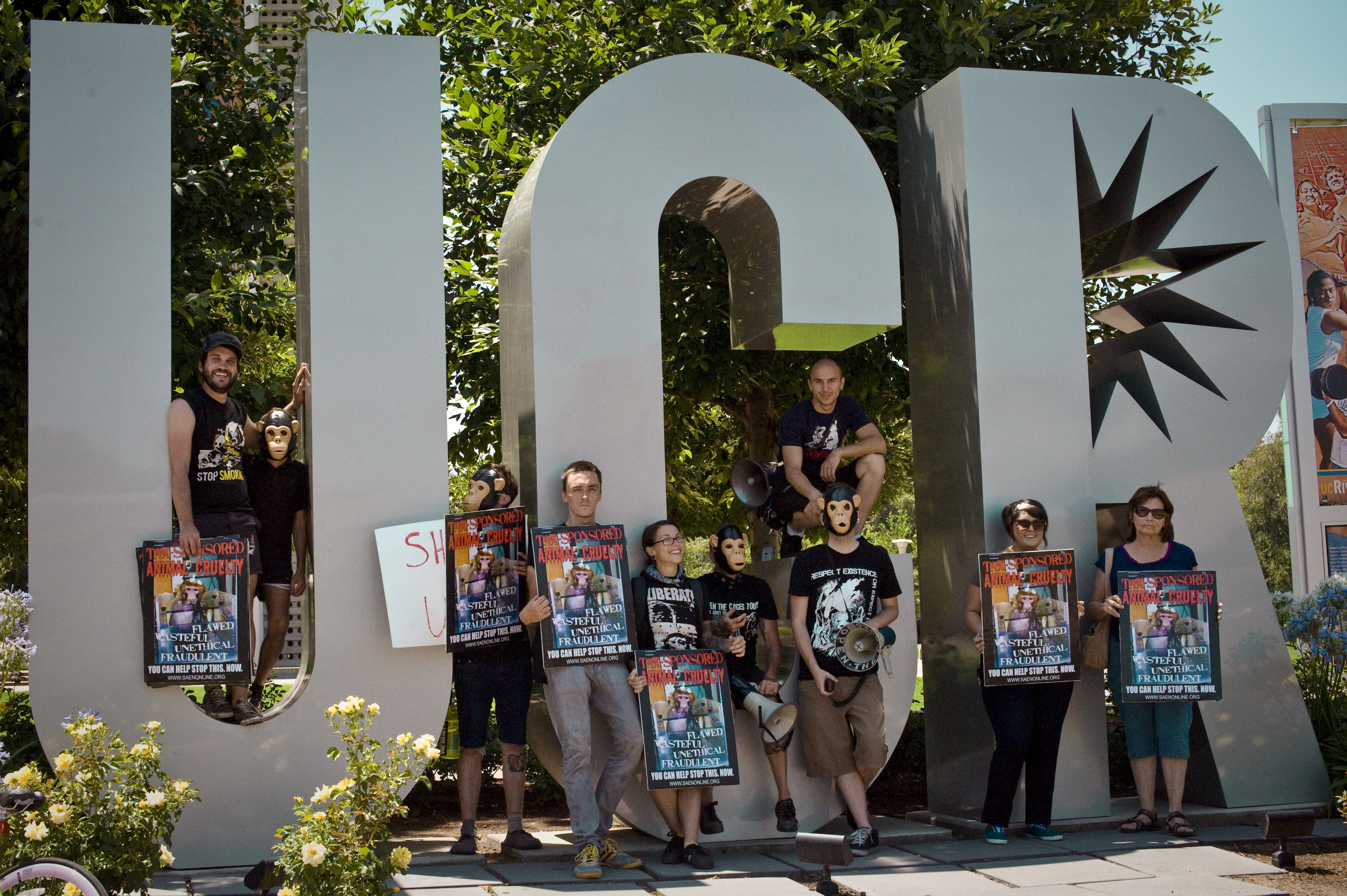